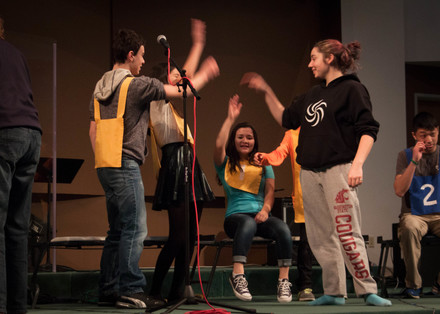 This meeting was conducted at the Portland-Troutdale Airport, a location with time-distance by car (for Oregon members) and airplane (for Washington members) that's roughly equivalent for all. The meeting was conducted in-person, outside, while maintaining social distancing. There was no agenda. It was a lengthy and in-depth discussion and deliberation about what will be best for PNW Quizzing during this difficult anti-virus time. As such, these minutes are in style more a summary of the full 2.5-hour meeting rather than traditional itemized meeting minutes.

Called the meeting to order around 1:40 PM with prayer.

The chair shared his perspective of the status of PNW Quizzing in particular and how the various Washington and Oregon anti-virus policies will likely impact the program over the 2020-2021 Matthew season. He shared that in reading through both WA and OR policy and after talking with both WA and OR policy departments, he doesn't see how PNW Quizzing can conduct an in-person quiz meet that fully conforms to policy until and unless the meet location's county is in "phase 4" (as it is currently defined) and all or at least a majority of churches attending originate in counties that are in at least "phase 3" (as it is currently defined).

The chair further shared that the planned location for last season's District Championships, Double K Retreat Center in Easton, is available on the Saturday for which we previously scheduled this season's Scramble meet.

The rules subcommittee chair shared information about the new Club Lists and Key Verses List policies and rules changes that will be implemented this season.

The chair shared his thoughts about what's he's tentatively calling XQ ("eXtreme Quizzing"). It's a theoretical way to run quizzing virtually that would provide the means by which quizzers who don't get jumps could answer "secondary" questions in real-time during "primary" question responses such that non-jumping quizzers could earn fractional points. These fractional points would not be sufficient to win against the average prepared primary question team, but they could help make a small difference between two roughly equivalent primary question teams. The goal being that a larger number of quizzers might as a result be motivated to study more verses because the reward bar would be lower without sacrificing upper-level quizzing quality.

The major negative with XQ is it requires a fair amount of well-tested technology to operate, which is unlikely to be completed to sufficient quality standards by the first regular season district meet.

The full board shared many ideas, brainstormed possible options, and discussed positives and negatives to these at great length.

The board unanimously agreed that should Kittitas County be in "phase 4" by the middle of September, we will host the Scramble meet in-person at Double K; however, the expectation is that this will not happen. Furthermore, should Kittitas County move to "phase 4" at any point during the 2020-2021 season, the board will consider sponsoring an impromptu social event at Double K should circumstances allow.

The board discussed all these details, and the unanimous consensus was that policy-compliant in-person meets would likely not be possible until early 2021, though all wished this was not the case.

The board unanimously agreed to the following resolution (or operating decisions) for the 2020-2021 Matthew season:

The board committed to maintaining agile flexibility and pushing innovation as we progress through the season to maximize any opportunities to grow and strengthen PNW Quizzing.