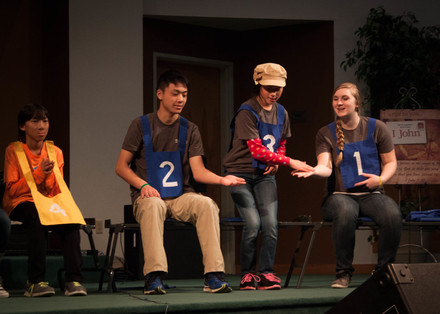 The following organizatons were represented at the meeting:

The following organizatons were not represented:

Gryphon opened the meeting by annoucing the sad news that Sarah has had to resign from the Board and will be taking a much deserved and well-earned sabatical from Quizzing for at least this current season. With Sarah's departure and the small size of our district at the moment, Gryphon felt it would be better to ask the General Assembly to discuss upcoming season plans instead of the remainder of the Board. The Board agreed, and thus we scheduled this meeting.

Gryphon set the discussion stage by talking through the current state of PNW Quizzing. We have 5 organizatons who have attested to be active this coming season: ABC, Madras, Trinitas, EBC, and Lighthouse. We also may have NSA return as an active organizaton. There's a wide range of strongly-held beliefs about WA/OR anti-virus policies, which at the moment require 100% masking indoors in WA and OR. Perhaps as much as 40% of this coming season's quizzers won't participate if masks are required, and it's Gryphon's contention that another season or even partial season of virtual quizzing will result in PNW Quizzing's collapse. Therefore, finding compromise acceptable to all organizations was required.

Several ideas were floated, but the idea that seemed to gain broad support was The Ultrameet™ Proposal.

Our season is typically the Scramble meet, then 5 regular district meets, then the Great West Invitational, and finally District Championships followed by Internationals.

The Ultrameet™ Proposal is as follows:

The Great West Invitational may or may not happen, but some discussion was had about PNW Quizzing hosting the event at Hungry Horse, Montana.

Logistics and Other Details

To make the Ultrameet™ proposal successful, we're going to need to work out many logistical and other details. These include but are not limited to: