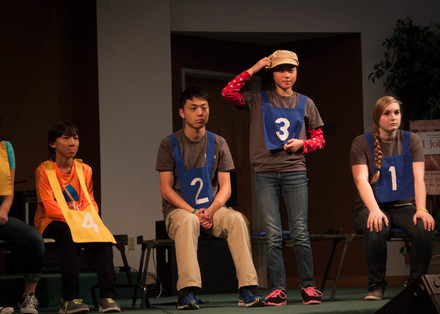 The following is the plan for team formation, officials selection, and schedule for the Classic Scramble™ meet. This is not set in stone, but it's rather a plan that may need adjustments in real-time at the meet.

Quizzers (for the purposes of Scramble defined as anyone who wants to quiz at Scramble, regardless of normal quizzing eligibility) self-organize into teams. They are incentivized to build diverse teams via the following scoring alterations:

Quizzers will be given "ID sheets" where they will record:

Quizzers will have 20 minutes to self-organize into teams. Once formed, teams fill out 2 roster sheets and hand them to the meet director.

During the lunch break, teams may trade quizzers between each other.

The following are the eligibility requirements for Scramble meet officials:

Everyone wanting to officiate should adds their name to an official's roster during the pre-quizzing 20-minute team formation period.

There will be either 2 or 3 "rooms" (outdoors), though likely 2. When each "room" has concluded quizzing, it will immediately begin setup for their next quiz by selecting teams and officials.

Teams will be selected by the following algorithm:

To select officials, sort the officials list randomly, then find the first person on the list that has not yet officiated in a role they would like, then assign them that role for 2 consecutive quizzes.